What is a PUD (Planned Unit Development)?

A Planned Unit Development, or PUD, is a form of zoning intended as a planning tool for larger tracts of land. For instance, most of us of live in Single Family zoning in which there is only one house on a lot and no apartments or retail or other types of commercial structures are embedded. Single family zoning also specifies a minimum lot size, how tall the home can be, and how far it has to be setback from neighbors.

PUD zoning is different in that it incorporates a variety of land uses, so it becomes a much more integrated property. PUDs are large properties that are setup to as a negotiation between the owner and the City Council. Jonathan Coon’s PUD, is governed under current regulations[1] but since the property was zoned a PUD in 1986[2] it only subject to regulations approved in 1986.

The City of Austin governing regulation explains PUDs as:

"General Intent. This division provides the procedures and minimum requirements for a planned unit development (PUD) zoning district to implement the goals of preserving the natural environment, encouraging high quality development and innovative design, and ensuring adequate public facilities and services. The Council intends PUD district zoning to produce development that achieves these goals to a greater degree, and therefore superior to development under conventional zoning and subdivision regulations”

Where appropriate, PUD development promotes projects greater than 10 acres that:


How is the Camelback PUD related to the Champion Tract 3?

If this plan fails, the option to purchase Champion Tract 3 will expire, the current Houston-based owner and developer, Slate Real Estate, will start construction on the 300,000 square feet of apartments at City Park Road / 2222, and we’ll see 2,100 trips per day added to a location that cannot handle this traffic. Jonathan would still be able to move forward with his plan for Camelback, minus the extra 150,000 square feet of office space. If he doesn not meet the deadline and does not purchase the Champion Tract 3, the rest of the plan for Camelback would proceed.

Where is the PUD located?

What development is included in the PUD?

The PUD will include 145 acres of the Camelback PUD as well as reference the Champion Tract 3 property and must be approved by September 1, 2018. Otherwise, Slate Real Estate resumes its plans to build the massive apartments on Champion Tract 3 with a primary driveway on City Park Road.

The property was zoned as a PUD in 1986 and continues to be a PUD today. Some people believe it was once zoned Single Family, but that is not true. It has always been zoned as a PUD.

In 1986, the 145-acre Camelback PUD was subdivided into only 70 lots that can have either single family homes and/or 140 duplexes. Tin 1986 there was no public benefit or mixed use. Jonathan has filed for a PUD Amendment that includs mixed use with a public park benefit.

Below are the current plans for the Camelback PUD:

Where will the structures be located?

What is the approval process timing?

The PUD will go through a full public review process.

First to the Park Board (in August). The Parks Board met and and gave the first recommendation of "superiority" for the Cliff Park and Preserve Park at the PUD.

Second to the Environmental Commission (EC) and next to Zoning and Platting (ZAP) Commissions for their recommendations, then to City Council for a vote on the PUD Amendment. Usually there are two readings (approval meetings with the public) at City Council.

If the PUD Amendment is approved by City Council, the next step is approval of a Site Plan. Only after that can construction begin. The construction could take up to ten years.

How will the views of neighbors views be protected?

Sophisticated lidar data (which is accurate to 4 inches) has been collected by drones and is being analyzed to make sure building height does not obstruct neighbor views. Structures on the PUD property have been relocated / readjusted so as not to obstruct the downtown views of surrounding neighbors.

Green roofs will be implemented so that people on West Courtyard will look down on green landscaping, not the blinding white reflection off an office roof.

The same technique will be used for Westcliff neighbors.

How will traffic be impacted?

See the tab on this websited called TRAFFIC MITIGATION


What does it mean that the proposed PUD needs to be “superior” to the old 1986 PUD? Why is that important?

There are distinct benefits for using PUD’s for large tracts of land. Among benefits to the owner, PUD zoning allows flexibility under established maximums for height, mass, impervious cover etc. 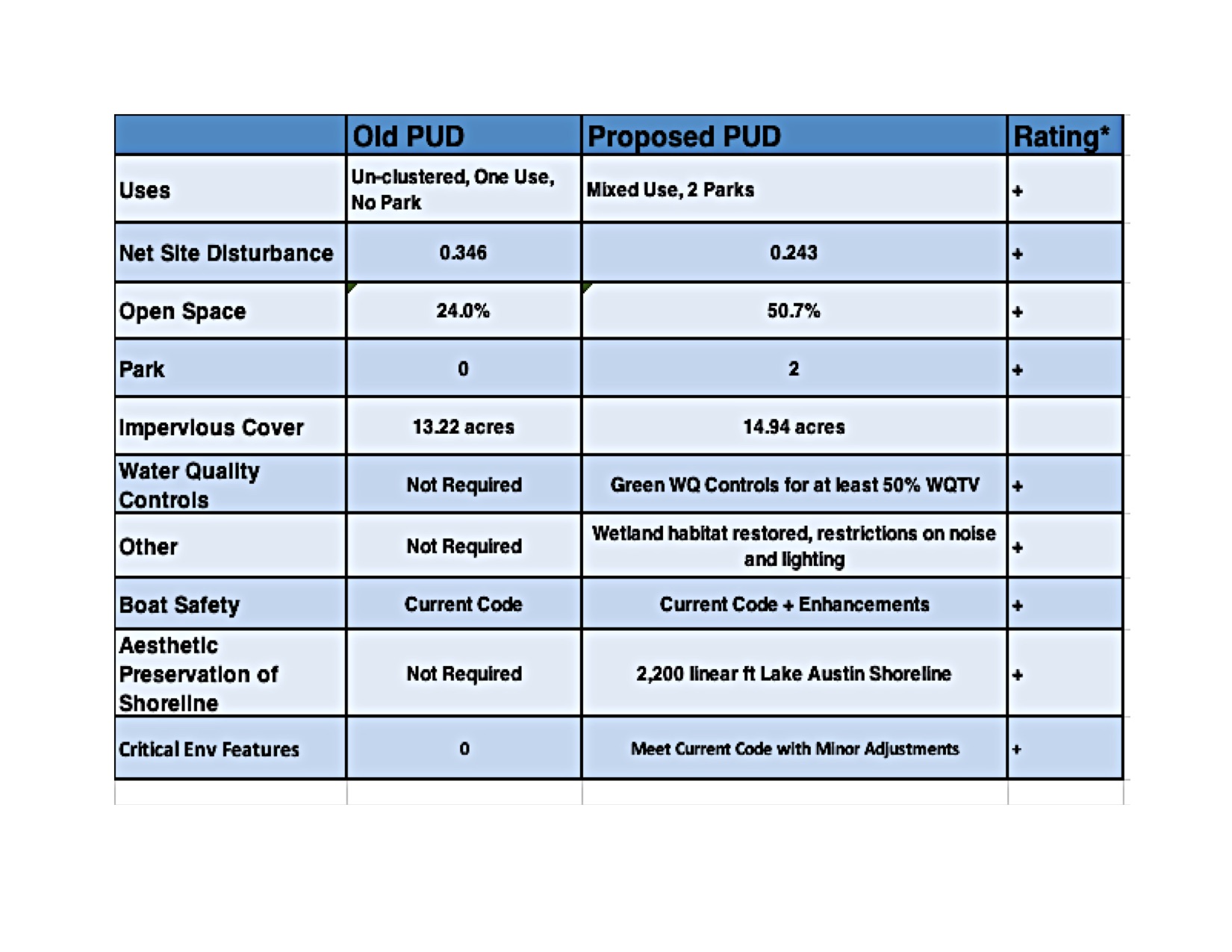 There are two parks planned, so who will be able to use them? Can we park close by?

See the tab on this website Called PARK INFO

What important environmental features are considered?

Why is the idea of a consolidated boat dock important? How is it different from a marina?

The PUD proposes a clustered dock with 24 boat docks for the 24 individual homes. It has been incorrectly reported in the Austin American Statesman that the PUD will have a commercial marina, but the PUD will not have a marina. (A marina allows commercial uses such as boat rentals or mooring commercial tourist boats for public use.) The only commercial boat that possibly will be allowed will be owned by the restaurant to transport patrons, but if the City considers this a problem Jonathan will not do it.

No fuel sales will be permitted.

AFD indicated the boat docks can be serviced by AFD which are moored nearby. More discussions are pending with AFD.

When will the boat dock safety plan be complete?

It is required at Site Plan – last step in the process.

Who will use the boat docks and elevator/tram or funicular?

Only Camelback residents will be able to use the clubhouse planned for the consolidated boat dock area down by the lake.

The elevator or tram or funicular( a mode of transportation up a slope that pulls a cable car) will only be for Camelback residents or restaurant guests with a reservation.

However, Jonathan has agreed to remove public access to the restaurant if the City views it as a problem.

If I want the details who do I contact? And where do I go to find more information?

What can I do?

An elevator or tram or funicular is planned that will go from the consolidated boat docs to the restaurant — that’s all. It is not in the water - it’s footed on land. It takes people from the boat dock up 200 feet to the restaurant.

The design of the transportation method is only in concept phase and will be finalized during site plan.


What is Open Space? and why does it matter?

The 1986 PUD plan went from 40% open space to 50% open space. There are 27.07 acres of parkland, which is 18% of the entire property. A total of 50% is permanently protected open space. This is in addition to the 12-foot wide, mile-long trail projected alongside Bridgepoint Parkway.

The 1986 plan had noncontiguous pieces of open space with 12 lots on the shore with boat docks.

What is the impact on the trees?

A full tree survey will be provided at the subdivision or site plan phase. Compliance with the tree preservation requirements applicable to the PUD will be submitted then.


How to evaluate if the Old PUD was better or worse than the New Amended PUD?